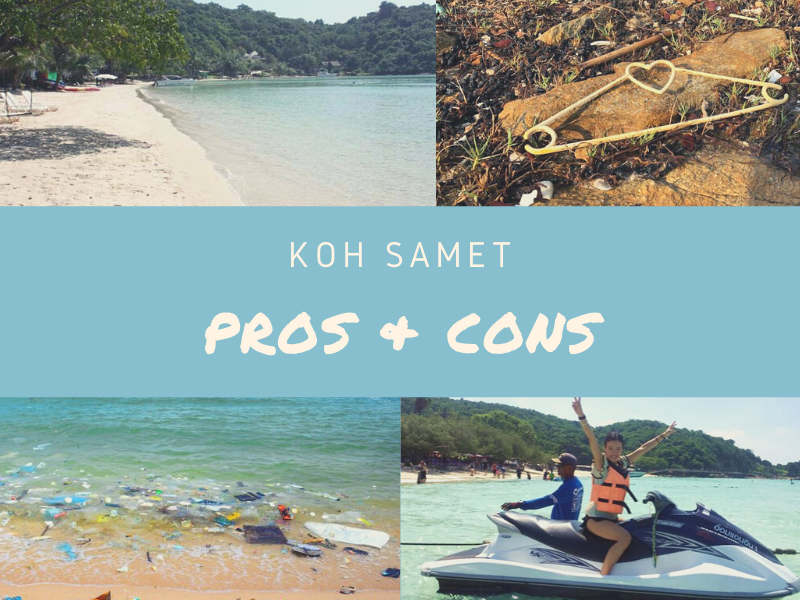 We love Koh Samet but no island is perfect. So here’s a look at the good and bad sides of Koh Samet.

Pros of a small, tropical island close to Bangkok

Koh Samet is a favourite beach escape for Thai students and families, and is now being discovered by increasing numbers of foreign visitors. We have travelled over the island to find the good and bad points here . . . and there are lots of positives that make this suitable for many, but not all, beach-lovers.

Koh Samet is not the closest beach resort to Bangkok, but it is the closest relatively quiet beach getaway with invitingly clear water and a natural environment. Both Pattaya and Hua Hin can be reached in two hours or less, while it takes two-and-a-half to get to Koh Samet.

For many people the extra time is worth it, for this island offers an entirely different, more natural environment with better beaches. No wonder the island sees an influx of Bangkok residents each Friday evening.

Koh Samet has clearest water, better than at Pattaya or Hua Hin

As noted elsewhere in these pages, it is impossible to find truly clear and clean water high in the Gulf of Thailand – too many rivers empty the garbage of tens of millions of people into this relatively small, enclosed body of water.

But Koh Samet holds the distinction of having the clearest and most inviting water close to Bangkok. Its position just outside the Gulf’s most polluted, top basin surely has much to do with this. However, while it appears much clearer and cleaner than the discoloured stuff at Pattaya, the statistics from the government’s Pollution Control Department show that Samet’s water is far from perfect, with the quality on Sai Kaew Beach dropping from 4-stars to 3-stars between since 2009.

Koh Samet developed as a distinctly Thai destination servicing the nearby population of Bangkok. At first the rough accommodations among the trees were a Mecca for groups of university students, but as accommodations improved Thai families soon followed.

The number of foreign tourists has risen rapidly in the past few years, however, and in the high season months there appears to be almost as many foreigners here as Thais. The rainy season sees the foreign visitors disappear almost completely, leaving it to the locals again.

It will be interesting to see if Koh Samet goes the way of Pattaya, with foreigners taking over and pushing most of the locals out.

The gradual upgrading of accommodation on Koh Samet from basic student huts to comfortable family rooms has seen the island moving progressively up-market and more expensive. But budget accommodations are still available here and the Bangkok university crowd still uses this as a favourite getaway for fun and romance.

On Friday and Saturday evenings large number of them are seen on the beach, generally in small groups of school friends. So Samet still has not lost touch with its roots, and this is the one place in Thailand where young people from around the world have a chance to connect with Thais of similar age. Most Thai university students speak some English, and are eager to meet foreigners.

Koh Samet is quieter during the week days

Foreigner visitors looking for a relatively quiet beach can find it here on Koh Samet for five days of each week during the high season months. With the influx of Bangkok residents restricted to weekends, the rest of the week is relatively quiet here. And of course during the monsoon season the week days are exceptionally tranquil, with the beaches almost deserted.

Most of Koh Samet is a National Park, covered with natural forest

Koh Samet is a National Park – though sometimes we might not guess it. Most of the resorts here are encroaching on national reserve land, but survive because they have been here for generations, and because there is so much public demand for them.

Over the years a number of National Parks efforts to remove or curtail the resorts have met public anger, and the accommodations have remained in a tentative stand-off.

National Park status might not be able to preserve the island in a pristine, uninhabited state, however it has managed to curtail many of the negative aspects of tourism development that have destroyed the natural environments in other beach destinations.

Pleasant wining and dining right on the beach

Everyone, it seems, loves to dine outdoors, right on the beach with their toes wriggling in the sand. Thai students and families, foreign tourists, they all love it. To cater for this passion the hotel and restaurant owners on Koh Samet have gone all out, moving their tables and chairs, and even their kitchens, way out onto the beach. Sometimes, when the tide comes in those sandy toes take a swim. You can choose between high and low tables, beach mats and lay-back lounges. Everyone loves the alfresco living, and Koh Samet is king of the beach when it comes to outdoor dining.

Another of the advantages of Koh Samet being a National Park is the restriction on motor vehicles and the number of roads. Visitors may not bring cars to the island, and those vehicles that do work here are restricted to meet the basic need to carry passengers to and from the various beaches and resorts. Visitors who want their own mobility can rent small motorcycles, but be warned, the few roads here are often narrow, rocky and rough.

Even as the northern beaches of Sai Kaew and Wongdeuan get quite busy over weekends and Thai holidays, the more isolated beaches in the south are surprisingly quiet. Ao Sang Thian is very low key, and the accommodations are rather basic. But the beach here is as beautiful as any on the island, and sees very few people. Further down at the very bottom end we find two up-market establishments, Paradee and Nimmanoradee resorts, both enjoying near complete isolation.

What are the CONS on such a pretty little island?

Even a picturesque tropical island like Koh Samet must have a few blemishes, and we dug deep to find those that are more obvious and might have a negative affect on the visitor experience here.

Sai Kaew and Wong Deuan Beaches get crowded on weekends

On weekends Sai Kaew Beach is far from tranquil. In addition to large numbers of people on the beach and in the water, there is constant traffic in speed boats coming and going, along with jet-skis, banana boats and more. This is the first beach one gets to when coming from the mainland, and has developed into the island’s ‘main’ beach.

It is also one of the most beautiful here, attracting lots of Thai families on weekends. Wong Deuan Beach is the next busiest beach on the island..

Beach access on Koh Samet is blocked by resorts

Finding your way from the road to the beach is sometimes a problem on Koh Samet. The resorts that have grabbed the beachfront land have left only tiny, and sometimes hard-to-find, tracks from the road to the sand. In view of the fact that most are here as squatters, surely the National Parks rangers could give the public better access to all beaches.

It is good to see Koh Samet being protected, partially, by the National Parks department. The island does not need a big network of roads. However, the few here are of critical importance, giving guests access from the main jetty to their hotels, and allowing visitors access to different beaches.

A little work to make those roads and tracks easier and safer, not bigger, would be in order.

Right on Koh Samet’s beaches: some pollution and rubbish

Black water streaming across the beach into the water is not a Samet problem, it is a national one. Drains carrying disgusting, stinking water can be found on beaches all across Thailand.

While the authorities recognize such pollution as a problem, the locals are not sufficiently disturbed by rubbish and black water on their beaches to take sufficient action to solve the problems.

Koh Samet is a Thai-style beach resort, and for Thais having lots of people, activity, noise and fun on the beach is all good. It’s the sign of people enjoying themselves.

The many jet-skis on Koh Samet are thus unlikely to upset the locals, though many foreign guests seeking a quiet, natural beach will not be pleased when these noisy machines buzz in among people bathing.

If you want peace and quiet, and to escape the jet-skis, go to a beach in the south, or west to Ao Prao beach.

Sightseeing and Activities on Koh Samed